Utopia. This word was repeatedly on the lips of the members of the ISO collective and on several occasions. The group was created by seventeen actors from eleven European (and other) countries and it was based on the manifesto they signed in St Petersburg, in November 2012. They went on to share the experience of similar encounters from then on and the group united once again thanks to the UTE (Union des Théâtres de l’Europe). The word Utopia comes from the Greek words οὐ (non) and τόπος (place). This time, the place was the majestic Porto in Portugal. The lively group of the young actors had one week, from the 22nd to the 30th May, and a common place to work in, experiment, suggest and try things out. Their guide? This time it was the renowned Portuguese director Nuno Carinhas. Their motive? A special play about the history of Europe. “The Last Days of Mankind”, by Karl Kraus.

Upon the table of the awesome Monasteiro São Bento da Vitória theatre, which was named after its former use and which is one of the venues of the Teatro Nacional São João do Porto, lie several maps of Europe following World War I illustrating the transformations brought about by it. One of the maps is completely plain. “If the maps appear to be different it’s not because the land and the sea have been rearranged on them, but because the borders have been changing. We are still facing many problems with respect to the borders”, points out the director, who regards Kraus’s text as being modern, let alone prophetic. Written for the present. “We are monsters”, he realizes after a while.

However, the reason he chose the specific play was political, rather than practical. The extensive text, playing with the notions of “language” and “ideology”, was written as some kind of drama documentary, embedding references, official documents, proclamations, and articles that were published in the press back then. Some of the numerous scenes are dramatic, others are comic. The directors, Nuno Carinhas and his assistant, Nuno M. Cardoso, selected the most interesting ones with respect to the dynamics of the illustrated relationships. 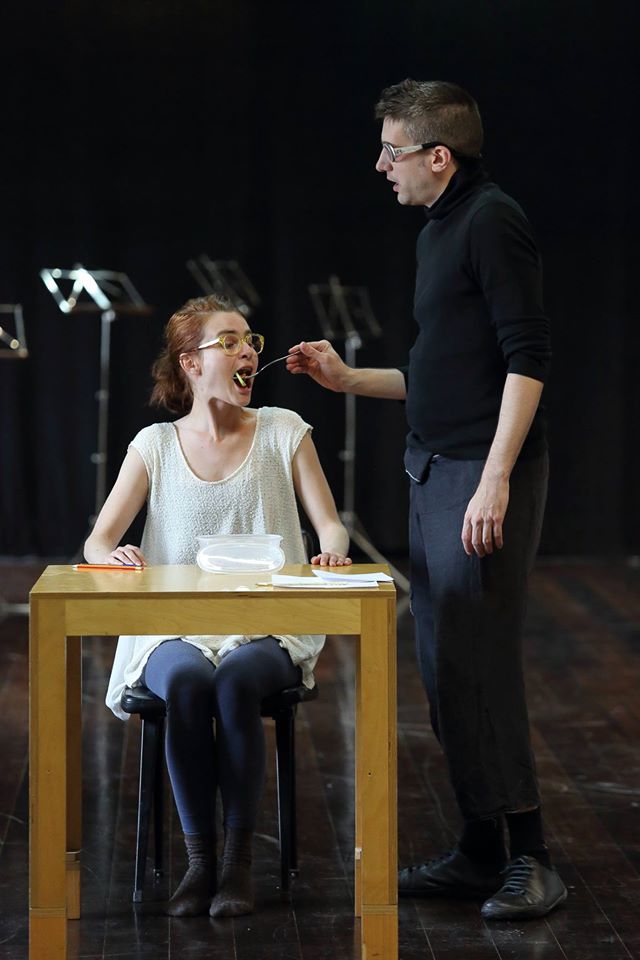 “This is your material and this is your space,” said the two and handed over the scene to the actors to have them improvise. “We gave no specific directions. The material is yourselves and the relationship among you”, they had said. They also had the brilliant idea to incorporate different translations of the play. This decision enhanced both the process and the outcome, as witnessed during the open rehearsal. By approaching the text via the different syntax and musicality of the distinct languages, they succeeded in reaching deep into the drama. “I barely know a word in Bulgarian and yet, I didn’t even feel I had to take a look at the text. Everything I needed in order to understand was already on stage for me to take in. Gestures, looks, the dramaturgy behind the dramaturgy, all of it spoke volumes,” says a viewer in the discussion that follows. The aim was not to come up with a performance. The presentation only took place so as to remind us that in order for the theatre to exist an audience is needed.

So, the natural obstacle posed by the language in the case of this workshop, turned out to be an interesting privilege. With its members having completely different origins, the team, already being in its third year, has started binding and creating its own internal dynamics. This was the first time they had ever worked on a given play, as they had been improvising so far, using devised methods.

“I think a specific play was what we needed. The whole thing is already utopian. When I was young I thought things would change, that it would be like living in a dream. I think it is good to be concrete and to work in a concrete way”, points out the French actor Vincent Menjou-Cortès.

“What we managed to do in only four days was very interesting. I don’t think there can be theatre without the actors’ personalities. You all have unique qualities and an amazing imagination. Each one of you had his own way to approach the material. Each one had a particular kind of energy. I don’t usually talk too much. Not even to the Portuguese actors. I use my body to explain things. This has been a very intense moment for me; a fantastic moment for you. You are all here, far from your countries and families, and all that you have is a place to work on an idea or on the theatre. It was too hard for me to go back to the office after that. I’m very proud of what ISO can be”, concluded the director, Nuno Carinhas.

After their brief presentation, it was time for the group to be the audience of another presentation. There could have been no better occasion than Joris Lacoste’s Encyclopédie de la parole in the packed Teatro Municipal do Porto “Rivoli”. It was a play devoted to the relationship among several languages and their musicality. An enjoyable choir reciting fragments of private and public utterances on stage.

Between meals, rehearsals and discussions, various topics came up. The current situation in our countries. What it is like to be an artist today. The intermittents in France. The situation in Greece. Actors’ training in Bulgaria. How the artists carry out their work in each country.

Speaking of utopias, the ISO team continues not only to believe in them but also to fight for them. A few days later, they organized a series of meetings with the objective of having the Academy turn into an independent theatre company that would spread its wings. Several questions were posed: “Where and when shall we meet? How are we going to find financial support? Who is going to direct us? How can we be political without talking about politics?” Many ideas were put to the table. Most of them concerned the dramaturgical choices. The ones that prevailed were about the “Oresteia” as well as Stories from the Bible. The people of ISO realize that in order to enunciate something new first you have to refer back to the classics. And in this sense, their pursuits seem to be pretty well organized. What is sure is that in a few days they’ll have the chance to reunite, exchange opinions and viewpoints once again, as well as share common theatrical experiences. This time, the place is going to be Sofia, Bulgaria. And the journey towards utopia continues. 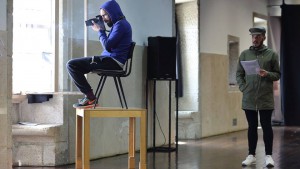 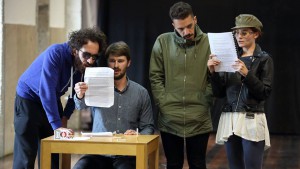