article by Andrea Rádai from Budapest

Watching performances in a congtext that is the opposite on an international festival situation is quite an interesting experience. A group of non-German speaking journalists affiliated with the Union des Théâtres de l’Europe had an opportunity to just do that in the autumn of 2017, as guests at the Volkstheater in Vienna. We saw three different plays on three consecutive evenings, all without surtitles. In this sense, the present article can be placed in a dialogue with Sergio lo Gatto’s article “Surtitled Theatricality: What language do artists export?” written in connection with an international festival, exploring how much the theatricality of a performance is based (only) on the text and what this means for a foreign audience.

Perhaps there could not have been a better time to test Segio’s theory than this: we had an opportunity to watch productions that were not necessarily intended for festivals, in their local setting, without surtitles and with minimal German knowledge. This is by no means an unusual situation, although writing about it is. To be honest, the opportunity to let go of the text often fills me with relief. As it is difficult to resist surtitles, even when one fights to succumb to the temptation: at least I, myself, am so verbally inclined that a scene rarely glues my gaze to the stage, I keep looking up, meaning I definitely miss a great deal of what is happening.

There is another reason why I feel that the situation at hand is the polar opposite of international festivals: I almost feel like a voyeur, peeping at the Viennese in their home, as they watch theatre made just for them. Even from the three plays, even without understanding the text, one sees what there is a market for, and what the artistic director, Anna Badora and the creative circle are intrigued by. One thing is for sure, the Viennese enjoy explorations (seeped in historical identity) about what it means to be Viennese: two of the three performances, Wien ohne Wiener and Alles waltzer, alles brennt dealt with specifically this question. The third production was constructed from two consecutive performances of Iphigenia in Aulis and Stephano Massini’s Occident Express about the post-migration society. This indicates, what may be evident to us, but not to all segments of the theatrical structure: that the Volkstheater is strongly focused on the present. How profoundly and in what depth the issues presented in the play are dealt with is another question. In the absence of text, I can only guess at how thought-provoking, provocative, playful or even didactic these productions were.

However, I am able to give a much more definite opinion on which of the performances had the strongest impact in terms of theatrical language: Nikolaus Habjan’s Wien ohne Wiener, even though this play is the least bit international. The production is a kind of homage to the deceased Georg Keisler, the Austrian cabaret artist who strongly relied on Viennese (Jewish) culture in his songs. On the surface, the context is completely foreign, but it seems contextual knowledge is not necessary for one to feel that the performance is about them. In other words, one does not have to be Viennese to feel Viennese (as someone from Budapest).

Naturally, among other things, it is the puppets in Wien ohne Wiener that make the play seem new, fresh and full of life. With the absence of a lingua franca, the audience becomes immersed in the visual stimuli. Habjan’s puppets offer a real treat: With their bulging eyes and wrinkled faces these figures embody the ridiculousness and petty bourgeois of people who step on our toes on the tram (And those polyester blouses and knitted waistcoats!). And it is as if death had left its fingerprints on all of the faces… The way the puppets move on stage is also exciting. They are actually life-sized, but their limbs are replaced by the limbs of the puppeteers, who fill the empty shirts, blouses, that are the torsos of the puppets with their own hands and bodies. Interestingly, this makes the puppets seem alive; and they seem to be “acting” even when they lay lifeless on the edge of the stage. Adding further colour to the production is that the puppets do not only have separate puppeteers but also separate voices: as one actor moves the puppet the other “dubs” its words. The production exploits the playfulness of this method, each element i.e. the puppets, the puppeteers and voice-over actors, have their own lives and communicate with one another. Funny gags include the “voice” knocking the puppet over the head, the broad-hipped Alpine girl built out of two actresses, and Claudia Sabitzer dressed as a pigeon looking like a puppet herself. And we have not even mentioned the music of the play! It seems that Wien ohne Wiener has such a great impact because it creates its own, new world out of existing texts (none of which I had been familiar with). The whole thing is very grotesque, incredibly funny and deadly.

On the second night, we saw Euripides’ Iphigenia in Aulis and Stefano Massini’s Occident Express. Anna Badora placed the two plays side by side. It is an unusual, but not unique method, a bit like a curator organising an exhibition of two independent pieces, maybe even from different eras, in a way that the pieces start to interact with one another. Naturally it is the task of the audience to find the link, the reflections of each piece with the other. We have seen examples of this in Hungarian theatre: Gábor Máté used this method at the József Katona Theatre, when he placed a genre-painting like play about gypsies set in the first half of the last century in contrast with a contemporary play about a series of ethnically motivated murders set in the early 2000s in Hungary. This experiment was followed by Csaba Polgár at the Örkény Theatre. He embedded a series of scenes also about murder into the well-known story of seven samurais from Kurosawa’s film. The audience could actually vote to decide the fate of the samurais in the last third of the performance. I remember how my thoughts jumped from one story to the next, how one interpreted the other without the solution being completely obvious.

The memories of these two plays danced around in my head as I was watching Anna Badora’s production; the lack of surtitles actually created a larger space to make these sorts of associations. Nevertheless, my lack of familiarity with the second play made this process more difficult as I did not understand the language. In essence, this method relies on each actor playing multiple roles. As they reappear in the second part of the production, their roles reflect upon each other. As I only had a vague understanding of Massini’s play, I found following this aspect of the production difficult. Rather, I watched the plays as two separate entities (or at least two separate parts of the performance). As a result, and also due to the lack of surtitles, the quality of the acting stood out even more. The difference in the style of the two plays was acutely apparent: the acting in Occidental Express seemed much more natural, reflective and multi-layered. Of course, the premise was also different: the actors narrated some of the play themselves and kept a distance from the story. This was obvious to me even without familiarity with the text, primarily thanks to the quality of acting. The other signs, the recurring motifs, the spilling of the paint, the proliferation of victims worked nicely, but it is again difficult for me to decipher to what degree Massini’s text takes over the story of the refugees, or speaks for them—an angle mentioned at a conference the day before by an artist of Syrian descent.

The production I saw on my third night was Alles Waltzer, alles brennt, which was quite likable even with the language barrier. However, it was during this production that I missed surtitles the most. To be more precise, this performance peaked my interest in the text (while Massini’s play probably was more predictable), it awoke a thirst for knowledge in me (even in an educational sense), and I kept wondering which aspect of the happenings the play dealt with. Irony and humour were quite clearly present, gags thundered through the stage and the story with dizzying speed. And I would like to take this opportunity to say that the solo of singer Eva Jantschitsch was absolutely magnificent.

Well that’s the way it is: if something interesting happens on stage, we notice it even without surtitles. 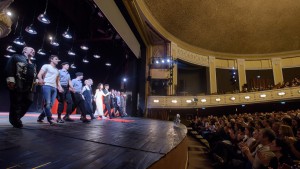