This is a follow-up on an article by our Portuguese journalist that also covered the UTE Conference on Theatre Structures in Belgrade. This article offers our Greek’s journalist’s perspective

“Can we all move to Austria?” This rhetorical question posed by Alexandru Darie, the artistic director of the Bulandra theatre in Bucharest, humorously interrupted a series of speeches full of numbers and information regarding the theatrical structures of seven different countries in Europe. It was a natural and spontaneous reaction, since so many different systems clashed in this conference in order to understand and detect each other’s similarities and differences.

Despairingly similar or chaotically different? The difficulties to be dealt with in the theatre by countries such as Bulgaria and Austria or Russia and Luxembourg, may be at the back of our mind, however, when they are put on the same table, they can be impressively revealing.

We had this chance on Sunday, 17 September 2017, thanks to the Union des Théâtres de l’Europe, which unites twenty different—not only—European theatres, from east to west, from north to south. Artistic directors from seven theatre members of the UTE, from Greece, Romania, Austria, Luxembourg, Serbia, Russia and Bulgaria, had fifteen minutes each to enlighten us regarding the way theatre works in their respective countries.

The place where this second meeting took place—the first one having taken place in May 2016 in Milan—was the welcoming though blocked off Yugoslav Drama Theatre (the Belgrade Pride Parade took place at the same time).

“It is quite impossible not to fund theatres in Austria. Our politicians realise how important it is”, said Anna Badora of the Vienna Volkstheater and Andrea Ruis of the Arts & Culture Division of the Federal Chancellery of Austria, describing a system—to be further analysed in conflict-zones.reviews soon—that sounded almost ideal.

Contrary to that, “More freedom in decision-making” is what is needed in Romanian theatre, says Alexandru Darie. “We need to ask permission for everything from the city of Bucharest which we are part of. Even something as small as hiring a person”. He, too, mentioned a terrible law about private funding, according to which 4% can be given to sport and only 2% to art, depending on the choice of politics. He also said that there’s “unfair competition” between public and private theatres. “We can’t pay the actors the same salaries since we are obliged to pay all taxes and rights. Private theatres never do that”, he said

Our biggest problem is that “we make it”, emphasized Stathis Livathinos, the artistic director of the National Theatre of Greece explaining that funding has dropped from 12 to six million per year. “Since you can get by on that amount, next time we’ll give you even less; this is how politicians think”. Some sponsors give financial aid. “They often complain because they want their name to be placed next to the brand name of the National Theatre. But this must not happen”, he said.

Margarita Mladenova of the Sfumato Theatre in Sofia has the same concern. “Over the past eight years we have been under the dictate of the market. Every theatre needs to sell more and more tickets in order to survive. This is why they hire so-called bear actors—famous TV stars”. In Bulgaria, there are fifty-five national theatres, which is quite impressive. “This is a good policy. What is not good is that they all share the same structure, and this does not allow us to be creative. We need more flexibility”, she noted.

Some new conditions, according to Tamara Vukovic Manojlovic from Serbia, are the free market laws which are being imposed on the theatre, the bureaucracy, as well as the constant budget cuts and the change in the audience’s behaviour. The Yugoslav Drama Theatre is funded by the city of Belgrade by 40–80%, and 20% of its budget comes from tickets.

The Theatre in Luxembourg deals with completely different issues, says its artistic director and founder, Frank Hoffman. “One hundred and sixty nationalities are involved in our productions. We certainly are an international theatre!” he proudly stated. “Nevertheless, the issues that arise have to do with identity, and are of an existential nature. Who am I? What’s my mother tongue?”

Boris Yukhananov from the Stanislavky Elektrotheatre in Moscow expressed concerns about the current situation in Russia. “All the changes that have occurred in our country over the past fifty years have also affected the theatre and its future is uncertain”, he said, while referring to the recent scandal of the great Russian director Kirill Serebrennikov’s (Gogol Theatre, Moscow) persecution.

The first and biggest sponsor of 700 theatres in the country is the Ministry of Culture, which funds big theatres, such as the Bolshoi or the Mariinsky, on a yearly basis. The funds go up to 12 billion rubles, which still cannot cover the cost of their existence. He also mentioned the existence of “benefactors” and not just sponsors in the theatre, which still remains non- commercial in Russia.

“There’s definitely more than one conclusion,” the president of the Union des Théâtres de l’Europe, Michal Dočekal from Prague, said, summing up the conference. He pointed out that theatre is undoubtedly part of the European cultural heritage, and that is exactly why the issues discussed here were of far more than of mere academic or practical interest. 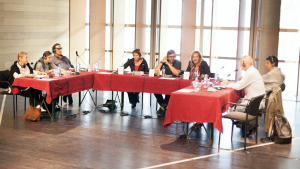