essay by Boris Zafirov from Sofia

THEATRE –
AN IMMUNE SYSTEM OF SOCIETY

Five years after its teenage period, comfortably described as “transition”, Bulgaria has started to realize what taking responsibility means and has stopped hiding under the pretty large overcoat of adopted democracy. Even though recent reformations in theatre are not in favour of the new trends and the sustainable development of its structures, certain personal achievements have proven that it is not the majority but an individual that reverses the momentum.

Getting over its immature period of bad aesthetics Bulgarian theatre is starting to realise its important position in the modern information-oriented society. Theatre is again perceived as a phenomenon that inspires and is able to change the standard of living.

Oppressed by the status quo and poor conditions of the state and municipal theatres many artists have created their own separate studios and workshops, or have started a freelance career. That trend has had a huge impact on the politics of repertory theatres. A symbiotic relationship has also recently been observed between independent and funded theatres. This positive outcome is not only a product of the artists’ needs, but it also reflects the wants of the public. The spectators cannot be deceived by cheap products anymore. Delegated budget (annual funding dependent on the ticket sales) is no longer a fear factor for the theatre managers. Not long ago it seemed they only aimed at high ticket sales, therefore only putting on stage cheap comedies and well-known common storylines with the excuse of “the spectator’s need” for easy comprehensible formats. Even in Sofia’s salons people were close to actually being persuaded that what they see is the ultimate form of theatre.

Fortunately, there will always be people who oppose corruption and manage to preserve the values of theatre. Directors such as Aleksandar Morfov (principal of the National Theatre “Ivan Vazov”), Margarita Mladenova (co-founder and leader of Theatre Laboratory “Sfumato”) and Yavor Gardev have never changed their true vision of theatre and have continued covering new grounds with their production, resisting common disrespect and intellectual genocide. In each production, Morfov strives to unveil disadvantages of both the individual and society. With Balkan manners he defines reality in his characters without turning them into grotesque figures. Productions such as “Hashove”, “Don Juan” and “Life is Beautiful” are like a breath of fresh air replacing the monochrome daily life with another version of it – still grey yet exciting. That same mirror reflects the shocking weaknesses of human beings. This existentiality is a trade mark of Margarita Mladenova and the Theater Laboratory “Sfumato” – characters embodied in journeys and dwellings of the human cosmos embraced by trembling love towards the traveler.

Popular theatre is a vital part of the wellbeing of cultural life. The whole ecosystem, though, is only possible through rich diversity. Some five years ago a whole new theatre species emerged—independent theatre. Two years went by before it became clear that independent theatre is not an exotic new trend that has come to replace repertory theatre. The handful of young gifted artists with contemporary vision and ability to communicate with the audience are in the vanguard of the new movement. The new generation of theatre makers such as Mladen Aleksiev, Veselin Dimov, Gergana Dimitrova, Ida Daniel, Valerii Parlikov, Marii Rosen, Yavor Kostov, Vasilena Radeva, Villi Prager, Iva Sveshtarova, Miroslav Jordanov are among the core of independent theatre activists. Thanks to their efforts (and those of many others) a festival dedicated to independent theatre has been created in Bulgaria, which has taken place four years in a row already. It’s organized by the Association for Intependen Theatre “ACT”, which is not only a measure for theatric aesthetics but a push start for the contemporary scenic arts in Bulgaria. Each edition of the festival underlines a different aspect of the problems independent theatre encounters and the needs it has. The festival’s main themes are rehearsal and performance spaces, audience, new forms of theatre, and funding. Its zenith so far was reached at the last edition with special guests from “IETM”— the largest independent artists network.

During the last few years several new spaces have emerged which unfortunately don’t have the capacity for the fast-growing scene. Another major problem is that only a small part of them are adapted to the needs of contemporary dance and performance in terms of technical equipment, which hinders the artists even more. These difficulties and sacrifices have become part of the everyday life of Bulgarian independent artists.

Another example of the struggle for the existence of the independent theatre scene is the contemporary dance and performance festival “ANTISTATIC” which has been taking place for seven years, thanks to Iva Sveshtarova and Willy Prager. They demonstrate incredible will power and ego as they annually adapt to the constantly decreasing budget. Despite the obstacles the festival presents the audience with world-class scenic artists, such as Elisabete Finger, Dani Brown, Gi E Lim, Ivo Dimchev and many more.

The difficulties that theatre encounters are much more a sign of progress and leaving the past behind than a crisis or hibernation. The clash of compromise, disagreement and accepting reality is clearly established in the politics of private theatres and those who are opening after a devastating crash for one reason or another. The Plovdiv-based private theatre “HAND” is a particularly interesting case. Founders Mariana Angelova and Ivomir Ignatov—Keni (probably the sharpest clown I’ve ever met)—have managed to renew their repertory for five years already. Be it an original text or a well known traditional ones, “Keni and friends” entertain the audience with quality production based on the dynamics of clownery and gestures of the human hand. Another interesting example for a heroic theatre resisting the misfortunes of Bulgaria’s cultural environment is the Rhodope Drama Theatre “Nicolai Hajtov”—a theatre showing great confidence in building its own spectacle program with high aesthetics.

Speaking of bravery in the dramaturgic scene, no doubt I should mention Replika Theatre. Created four years ago by the freshly graduated actors Ovanes Thorosian, Blagoy Boychev, Milko Yovchev, Ivaylo Dragiev. During the last few years the ensemble started working mostly in a way of radical theatre. From the first production on it was clear that this is the long-awaited direct theatre that substitutes the categorical expression of the radical theatre for indirection and lack of sincerity. It now takes responsibility for what the problems are. The appearance of Georg Genoux plays a major role in the development of “Replica” (co-founder of Theatre.doc/Russia)  in the direction of the radical theatre. He was persuaded by Vasilka Bumbarova (festival selection manager) in 2013 that Bulgaria is the right place for him to work in. For the moment Georg Genoux is leading another one platform for radical, social theatre in partnership with the actress Irina Andreeva- “The institute of rubbish”.

The theatre I write about is the theatre which, as Julia Ognyanova* says, will convert mental problems into aesthetic ones.

*key figure in Bulgarian theatre from the 60’s till today.

Published on 30 May 2015 (Article originally written in Bulgarian)

Boris Zafirov lives in Plovdiv/Bulgaria. He works as a theatre dramatist and as a cultural journalist. He had his debut as a theatre director in may 2015 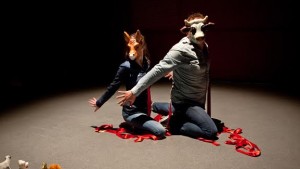