article by Ina Doublekova from Sofia

Mixing the languages: personal encounters within a digital framework

UTE’s Sofia correspondent, Ina Doublekova, gives a vivid picture of what happened  in Vienna’s Volkstheater during a warm pre-spring weekend in March through the workshop and premiere’s experience of 25 young Europeans from five different places and cultural and migrational backgrounds made possible by the educational theatre project Digital Natives. 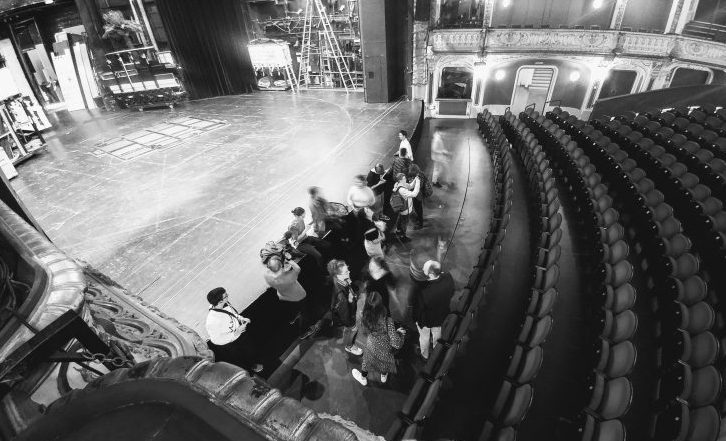 DIGITAL NATIVES is a cooperation project between five of the UTE’s member theatres: Volkstheater Wien, Comédie de Reims, Hungarian Theatre of Cluj, Schauspiel Köln and National Theatre of Northern Greece. The starting point of their collaboration is the play Concord Floral by Jordan Tannahill, a play about teenage identity and interactions, the power of perception and technology. The five theatres will take the text and work on it, either staging a production or using its themes as the basis for workshops with amateur teenage actors. The theatres, together with their amateur actors, will simultaneously develop a digital experiment during the rehearsal period.” – explains the text on UTE’s website, presenting this year-long, transnational educational initiative. However, what is not mentioned in this paragraph and naturally does not fit into this kind of project descriptions is that the teenagers involved are 90 in total – 15 in Cologne, 40 in Thessaloniki, 10 in Cluj and 10 in Reims, 5 stage directors are working with them on a weekly basis during the rehearsal period. Now just imagine how these five different groups meet in these theaters in each city almost every weekend. How they work with and on Concord Floral play (or do not work on it all but still spend time together), probably often simultaneously. So close and so far away at once – in the same theatrical dimension and at different geographical locations. Put in the same project and virtual framework but apart, at least in the first step of the project.

And yet, one weekend they all came together for a very first time in Vienna. This meeting was not in the initial schedule of the project but instead an almost spontaneous change in plans, which the Volkstheater agreed to host. In the morning the teenagers participated in their first ever workshop together and in the evening they attended the premiere of Silver Surfers – a performance created by the Volkstheater with seniors and millenials, again in the frame of #digitalnatives19, that you can read more about in Sergio Lo Gatto’s text.

Witnessing their first live encounter, after three premieres of Concord Floral already done in Vienna, Cologne and Reims and more importantly after all the participants having been in touch with one another via Skype for more than a half year now, was thrilling and though-provoking experience. Having to describe it – meaning to “zip” it into words for people who were not there – for an online journal makes it even more so.

The teenagers met in one of the rehearsal rooms of Volkstheater on a Saturday morning. The idea was for them to get acquainted with one another and also get a grasp on how the workshops happen in each city, what their counterparts have been doing,. For this purpose each of their trainers – Simon Windisch (Vienna), Bassam Ghazi (Cologne), Naïma Perlot-Lhuillier (Reims) – worked with the whole group for about an hour each, involving them into activities and trainings that they normally practice at home. Needless to say, at the beginning the atmosphere was awkward. Most of the kids were shy. One of the first rules established was that languages needed to be mixed. The first meeting ground for that, as it was noted, was the English language, which was not native for anyone but was the one which everyone spoke. Then came the body language. Everyone was encouraged get louder and louder, to stretch beyond the timidity, to open up to the others. To look them in the eyes. To team up with someone and to learn to follow their gaze, to recognize their laughter or cry from a distance. Some of the teenagers started acting out. One could tell that they got into it and got intrigued. Links were built; question of power (and superpower) was also raised. Through exercises and games synergy came into being. The languages were mixed up indeed. The atmosphere was now joyful and exalted. The magic of a dense personal encounter had worked out.

And here aroused a major question: how much this result was favored by the online encounters the teenagers had before their live meeting? And how their interaction online will be changed from now on that they know each other in person? What is the recipe for mixing up the language of the digital communication with the one of the personal interaction in the right proportions to make it taste good and right?

During the discussion, many crucial issues were touched upon: the personal data collection and the fact that all our activity online is tracked, which violates the fundamental right of doing things without being under surveillance, thus this gathered information is used as an instrument of control and manipulation. What is more, algorithms are not transparent and tend to strengthen inequality. One possible solution mentioned is for these processes to be led bottom-up, which is not the case at the moment, since the major players on the field like Facebook, Amazon and Google are privately owned corporations. Furthermore, the situation of internet security in Europe was discussed, comparing it to countries like Russia and China, which are developing their own internet, while most of the servers where the European information is stored are still in the USA.

Without undermining at all the importance of those significant concerns, it seems that there are several outstanding tendencies when we talk about the digital world that we inhabit in general. First of all, we talk about it a lot and discussions about the near and distant future are quite common these days, which, is already a symptom.  Second of all, those debates often seem to be only two-sided (which was not the case for this conference) – there is one side claiming that the advance of digital world and the artificial intelligence is good and there is another side explaining why it is bad. Third of all, the digital is presented as a separate entity, a world of its own, not connected to the analog world outside the screens of the mobile devices.

Having attended both events in the course of 24-hours, it seems that probably we should start thinking of it as a mixture, as the right balance and between the two, as the golden middle. The digital is here to stay. And it is part of the analog daily life. And vice-versa. Nowadays they complement each other and how this relationship works needs to be examined deeper and deeper.

Ina Doublekova Lives in Sofia/Bulgaria, pursuing her PhD in Theatre Studies while at the same time working as a freelance journalist and cultural manager.