report by Lucie Beraha from Paris

Facing the strange in Craiova 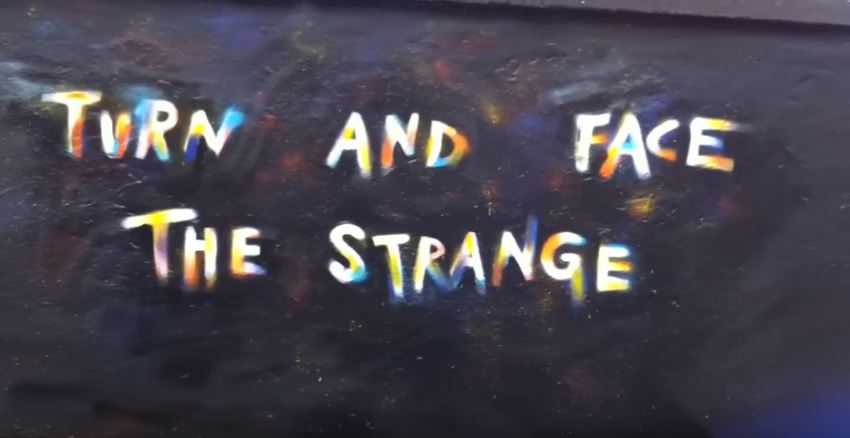 Sunday, 24th April 2016. A wind coming from Europe blows over the city of Craiova, Romania. In the streets, in the restaurants and in the wide hall of the National Theatre Marin Sorescu, one can hear the music of a joyful compilation of foreign languages. Unknown accents and unpronounceable sounds: English, Hungarian, German, Spanish, French, words from dozens of countries sounding as the same language.

At the National Theatre Marin Sorescu, the International Shakespeare Festival presented two performances by Romeo Castellucci and Thomas Ostermeier as a curtain call. The Europe Theatre Prize comes next with a three-day program of performances, conferences and international meetings. Launched in 1986, the ETP was initiated by the European Commission to distinguish the artists whose works “promote understanding and the exchange of knowledge between peoples.” This year it was awarded to Mats Ek (Sweden), Viktor Bodó (Hungary), Andreas Kriegenburg (Germany), Juan Mayorga (Spain), the National Theatre of Scotland (Scotland/United Kingdom) et Joël Pommerat (France).

Sharing with the ETP a long-standing history of collaboration, the Union of Theatres of Europe participates in the event. On 24th April 2016, the UTE presented a public discussion, whose title “Turn and Face the Strange” is borrowed from the David Bowie’s song “Changes.” The “strange” refers to the multiple, fleeting, inconstant world on which theatre attempts to cast a light. It is within such “fundamental relationship to the present” that theatre indeed shares a responsibility over the flow of events that strikes and disrupts our societies. To explore these questions, twelve among theatre makers and administrators from Austria, Bulgaria, Czech Republic, Germany, Greece, Iceland, Italy and Portugal were gathered together and invited to join a discussion, moderated by Italian journalist Sergio Lo Gatto. What emerged is a bunch of visions and experiences of theatre, an idea that each one of them believes as essential, because firmly linked to our present time.

Diverse and multicoloured are the answers to Sergio Lo Gatto’s questions. To someone, theatre is a getaway through a suspended otherworldliness, a “mindful pause” within the crazy chronology of our present existence. Others consider theatre as a living manifestation of the “Here and Now”, an imperious reply to the urge to tell about the world and to make a difference. We often put two kinds of theatre in opposition: on the one hand, a “fiction theatre” that’s able to pull us out of our everyday life and let us be free, and on the other hand a type of theatre that aims at having an effect on the world by confronting us to it, harshly sometimes. Nevertheless, rather than one out of these two, thousands kinds of theatre exist: they discuss, they confront, but none of them will ever exhaust the infinity of resources that artists convey to makes us stronger, greater, freer and alive.

This article is an account of what has been said among the most remarkable during this discussion.

A watchful theatre that sounds the alarm

Slovak choreographer and artistic director of Farm in the Cave company, Viliam Dočolomanský, develops a work that stems from anthropological research. His last project “Disconnected” deals with “Hikikomori”. The term, which means “disconnected” in Japanese, refers to men and women who withdraw from social life because they feel unable to cope with the pressure of a society characterized by a strong competition. As Viliam Dočolomanský remarks, Hikikomoris are the “tax that our societies must pay for living the way they do”. By broaching the subject, the Slovak artist wants to alert the general public on the reality of a phenomenon unknown in Europe. In his sense, his duty as an artist is to be “the canary in the mine”, the one who— anticipating the dangers that people might be facing—sounds the alarm. But in order to be able to influence the course of events, “theatre must tackle the real problems”, Viliam Dočolomanský adds. This capacity to attract spectators is the only condition that can enable theatre to act as a real whistle blower and fulfil its duty that is to generate change.

A living theatre to “change life”

According to Pippo Delbono, the problem is not a matter of content, but a matter of form. What the Italian artist wants to do throughout his performances is to inject life in a moribund theatre. Quoting Bergman, according to whom “theatre is a meeting with human beings”, and pointing out his affiliation to Jerzy Grotowski’s “poor theatre”, Pippo Delbono expects theatre to “change our life and points of view over things.” It is something that fiction theatre cannot do, because “actors are phantoms”, he believes. Pippo Delbono’s actors, on the contrary, are “real people”: disabled, homeless or refugees, these men and women who often live on the fringes of society find on stage a dignity to which they cannot have access elsewhere. This dignity lies in their technique. With his theatre, Pippo Delbono creates a space where the beautiful, the poetic and the extraordinary are not the monopoly of the artists, a space where the outcasts talk and the privileged few listen. In the concrete experience of such a reversed structures of domination, in the awareness that it might raise, in the change of perspective that it might arouse, lies the hope of a possible transformation of life.

A free theatre to “stop life”

Founder in 1988 of the Compagnia della Fortezza, Armando Punzo also works with non professional actors. In fact, the Italian stage director develops his works with the convicts of the prison of Volterra. Denying any ambition to do social theatre, Armando Punzo insists on the artistic dimension of his approach: “The prison—he says— is the model of the society, the prisoners are the model of the human being.” He chose these place and people to be the material of his theatre, because they express something fundamental about our contemporary world. But this theatre that tells spectators about the world also owes its strength to its capacity to “create a suspension in life,” “to stop life.” Inside the prison of Volterra, Armando Punzo created a space to read, discuss and perform, that nobody is ever forced to enter. This “out of time space,” far from the confinement and isolation of everyday life, offers a place to search and experiment liberty. Since the creation of the theatre company, “the prison became one of the most open in Italy.”

A theatre of distortion

While Armando Punzo diverts the penitentiary space from its primary logic of confinement, Icelandic director, author and actor Gíssli Örn Garđasson, member of the Vesturport Theatre, insists on the need in Iceland to circumvent the commercial logic of theatre institutions. Allegedly more profitable, stagings of classical texts represent the major part of the artistic programs of Icelandic theatre institutions. While it is almost impossible for artists to produce something else, this constrictive situation obliges artists to develop strategies of circumvention, explains Gardasson. In the hands of the Vesturport artists, classics thus become the Trojan horse thanks to which they can invade the Icelandic and international theatres and make their works known from a greater audience. As Viliam Dočolomanský underlined it earlier, the question of the audience is crucial, since a confined and isolated theatre cannot influence society. This is why Vesturport artists use all their means to give their works a wider audience, especially mass media such as television or cinema.

A theatre of resistance

Responding to this tricky approach of a theatre struggling to exist in a world rules by profit, Bulgarian playwright and associated author of the Sfumato Theatre in Sofia, Stefan Ivanov, defends a theatre of resistance. Mentioning Gilles Deleuze’s remarks on the links between art and resistance act, Stefan Ivanov describes theatre as a besieged entity, struggling against the forces that threaten our imagination, empathy and courage. This theatre of resistance always faces dangers: on the one hand, the danger of institutionalization that neutralizes all forms of subversion, on the other hand, the danger of the absorption by the market that turns theatre into nothing more than a mere product.

A theatre of distance and emotion

Italian playwright and associated author of the Teatro di Roma Roberto Scarpetti believes that these traps can only be avoided if the author keeps a certain distance from reality. Although his theatre obviously tackles the problems of our time, it also has to do with a certain strangeness. Underlining a fundamental difference of nature between theatre and television, Roberto Scarpetti describes the unique power of theatre as the result of a paradoxical movement: on the one hand the author creates distance from reality, on the other hand he aspires to move the spectator in the innermost parts of his soul and body. “I try to keep my distance from reality. But in order to understand a reality which is far from us, we need emotion.”

A theatre of cry

But what happens when reality is so imposing and painful that it is impossible to keep away from it? What do playwrights express when the only words they have are cries? This is the question raised by Greek playwright Angeliki Darlasi. Mentioning the crisis in Greece, she explains the difficulty for authors to put words on the experience, now and here, of an unbearable suffering. “When I try to write about this situation, I cry, I get too emotional about it.” If many Greek artists prefer not to broach a subject which they can only talk about with emotions, Angeliki Darlasi believes that “something interesting may come out from this theatre of cry.” This “something” is the hope for theatre to continue to live and tell the world, no matter what.

As Francisca Carneiro Fernandes (President of the board of directors of the National Theatre São João Porto) rightly remarks, there is not one way of making theatre. When theatre, through its power of fiction, tears us away from “the fear and guilt of daily life”, it proves itself to be vital in order for us to continue to live. Yet, the many forms of theatre are what enable it to embrace the perpetual movement of history. The duty of the artists, as Michal Dočekal (artistic director of the National Theatre Prague and UTE President) sums it, is to make sure that theatre never become “a hunting dog running after changes but never managing to catch it.”

An imperative to which Sergio Lo Gatto responds by quoting the words of Jacques Copeau on the occasion of the opening of the Théâtre du Vieux-Colombier in 1913: “We don’t believe it is enough today to create great works; where will they find acceptance, where will they meet both their public and their interpreters, in an atmosphere favourable to their development? Thus, inevitably, like a “postulation perpetuelle” this great problem confronts us: to build a new theatre on absolutely solid foundations. Let it be the rallying point of all those, authors, actors, spectators, who sense the need to restore beauty to the stage. Perhaps one day will see this miracle realized. Then the future will open up before us. […] Let us try, at least, to form this little nucleus from which life will radiate, around which the future will make its great contributions”. 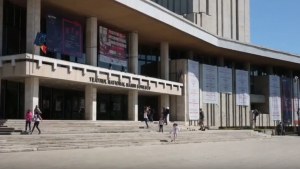