article by Ana Tasić from Belgrade

Festival of the Union of Theatres of Europe in Cluj. 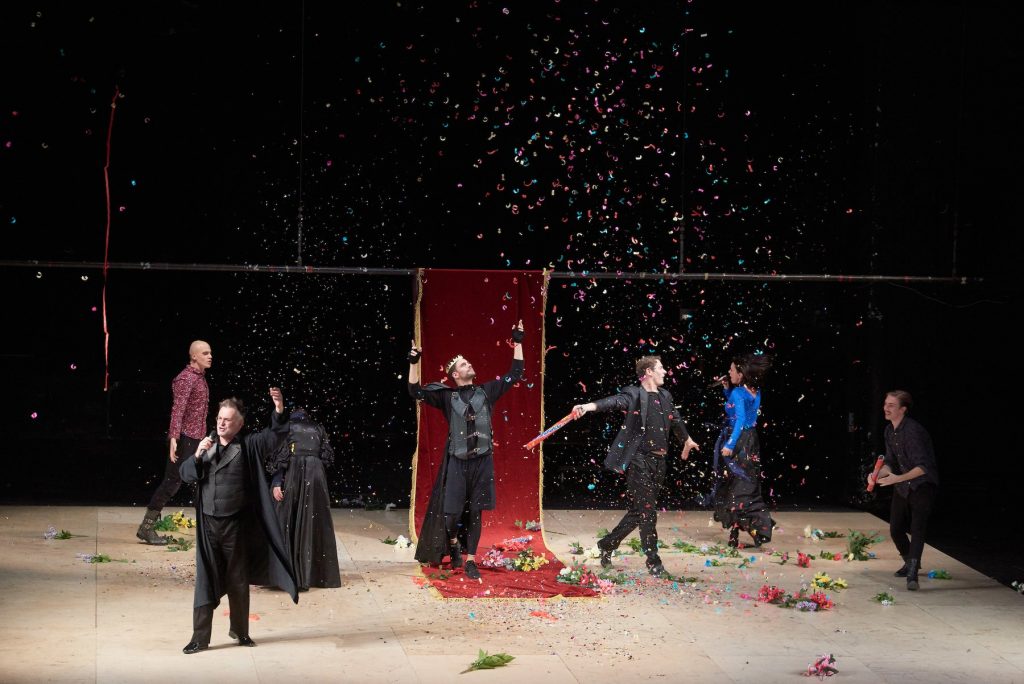 The 18th Festival of the Union of Theatres of Europe was held in the Romanian town Cluj, Transylvania, from 19th till 30th November, hosted by the Hungarian Theatre in Cluj. The program consisted of the performances by the theatres that are members of UTE, one of the most influential theatre unions in Europe. UTE was founded in 1990, by the then French Minister of Culture, Jacques Lang, and Giorgio Strehler, the artistic director of the Piccolo Teatro di Milano, with an idea to strengthen theatre links within Europe, i.e. to unite theatrical Europe. Today, UTE is made of thirty-four members, and the Yugoslav Drama Theatre is its only member from Serbia.

The festival presented twenty-four performances from Romania, Greece, Germany, Luxemburg, Portugal, Russia, the Czech Republic, Hungary, Bulgaria, Italy, and Serbia. The audience had an opportunity to see some conventional interpretations of contemporary plays (e.g. “Elephant” by the National Theatre of North Greece), more experimental expressions based on exploration of movements, visual and verbal (“The Rebellion of Objects” by Teatro di Roma, “Crazy Grass” by Sfumato Theatre Laboratory from Bulgaria), as well as some ambitious, inspirational interpretations of classics. Serbian representative was the Yugoslav Drama Theatre with its superb “Lorenzaccio”, directed by Boris Liješević. The problem of revolution, raised by “Lorenzaccio”, was one of the main topics in the festival productions. We will here single out three extraordinary performances that explore present-day possibilities of fomenting revolutions on the social and political level, but also on the personal one.

“Danton’s Death” directed by Nuno Cardoso and performed by the National Theatre São João from Porto is a visually fascinating, poetically and choreographically playful interpretation of Büchner’s powerful reflection on the tragic character of the French Revolution (and any revolution, for that matter). Cardoso establishes a discreet parallel between revolutionary Paris of 1789 and present-day protests by yellow vests movement, first visually, in terms of costumes, but then also in terms of the content. The characters are wearing contemporary costumes, thus referring to a timeless need for political changes, which nowadays means a rebellion against new walls, populism, xenophobia, global anxiety, and terrorism.

The stage conveys emphasized symbolic meanings. The central part is gapingly empty, which puts forward the idea of aloneness and loneliness of the ones in power. A cracked background wall also bears symbolic meanings, with huge fans on it revolving in a hypnotizing rhythm. Their relentless rotation discreetly represents the tragic endurance of cyclic time, the Shakespearean wheel of history which mercilessly grinds. It can be also understood as an associative reflection of Danton’s (played by Albano Jerónimo) painfully cognitive rhetorical question: “Will this clock ever stop?” Moreover, in the context of the plot, the gigantic fan hints at the meaning of a slaughterhouse, since the history of civilization is the history of mutilated bodies, but also of mutilated ideals.

The Portuguese “Danton’s death” offers a pessimistic view of revolution, demystification of its hopes, reminding us of Drinka Gojković’s thoughts about Büchner’s play. Paraphrasing Brodsky, she wrote: “The tragedy of Büchner’s characters does not lie in the fact that they have to go down together with their ideals but, on the contrary, in the fact that they have to live without them”. Not only have the characters lost their faith in revolution, knowing that it devours its own children, just like Saturn, the Roman God of Time, thus symbolically demonstrating that whatever is born in time will also be eaten by the time, but they no longer believe neither in life nor in man. Cardoso’s interpretation of Büchner conspicuously demystifies human nature, through philosophically inspirational discussions about existence, God, nothingness.

Occasionally and discretely, the performance includes documentary black-and-white video projections of close-ups of tortured faces, which highlights the atmosphere of the play, its tragic overtones, and emphasizes the important documentary nature of Büchner’s play. The layered structure of Cardoso’s theatre language is enhanced by the introduction of grotesque scenes that tensely demonstrate the joy of existence, a party of the characters dressed as entertainers while dancing to the idyllic tones of “The Blue Danube”. The feeling of grotesque spreads throughout the entire performance, through the constantly grinning images of tragic victims of the revolution. Everyone is incessantly grinning because there’s nothing else they can do; it is a reaction to the encounter with nothingness.

In his study “The Sociology of Theatre”, Jean Duvignaud wrote that the political tragedy “Lorenzaccio” by Alfred de Musset (1834) is considered to be a play which requires great spiritual effort, that it is a play in which love and heroism in its pure form can never be seen, that Lorenzaccio is not a hero with clear intentions, but a weakling who treacherously assassins the duke. These theses serve Duvignaud to explain why the play was not performed back in the time when it was written (it was “rehabilitated” by Jean Vilar’s successful directing in Paris during the 1950s).

Using the aforementioned problems of this romantic play to its advantage, director Boris Liješević has created a successful performance based on a clever theatrical play (adapted by Fedor Šili, dramaturge Miloš Krečković). It is staged in a Brechtian manner as a work in progress, as a rehearsal open to contemporary meanings. In the centre is the play itself, toying with the revolution, which gives rise to the feeling of the ritual character of the revolution in history, a cyclic, eternal repetition of the mechanisms of tyranny, the power which exhausts people, and of the revolution that devours its own children. Very skilfully, the actors Marko Janketić, Branislav Lečić, Milan Marić, Sloboda Mićalović, Milena Vasić, Miodrag Dragičević, Petar Benčina and Joakim Tasić, resorting to various and always appropriate approaches, based on grotesque, but with occasional steps towards realism, consistently present this idea. The performance aptly brings forth philosophical dimensions of the plot too, the issues of the relationship between reason and old age, freedom and power, love and lust, good and evil, which cannot exist one without the other.

The stage illusion is shattered right from the start, in terms of stage design, with a big red crate placed onto a wide empty stage, with an inscription JDP (Yugoslav Drama Theatre, T/N), Florence, 1536 (stage design Gorčin Stojanović, costume design Maria Marković Milojev). Highly aestheticized theatre language and self-irony will be denoted throughout the performance, for example, when actors temporarily break their characters in order to announce the scenes, or when they read the text demonstrating thus that they are not characters but actors and establishing Brechtian distance which requires closer attention on the part of the audience. It is in line with the Brechtian stylistic approach that we interpret the decision that the actors play more roles too, which leads to a relativization of their position, porousness of the border between the tyrant and the benefactors, the villain and the righteous man. Songs make the loose dramatic structure even looser, as well as the elements of ironic creation of spectacle. That is what, for example, happens at the end of the performance, when the confetti creates the joy over the “new beginning” after the murder of the tyrant, suggesting an ironical, disclosing attitude to the new beginning. History, the merciless teacher of life, has taught us that it is only the names of the new leaders that change, while the essence of the power remains painfully the same, firmly rooted in corruption, serving one’s own interests, and constantly putting people in misery.

Nora in the Cyberworld

Henrik Ibsen’s “Nora” also thematizes revolution, but in the scope of private, marital life. In his analysis of this play, Predrag Kosić has written: “A conflict between two people in love, and the society has never in the world literature been private, since great artists have always created the relationship between a man and a woman in order to depict contradictions of society which has always deprived people of their right to make decisions that concern their own lives”. In other words, in Ibsen’s dramatic reflection of the world, the feminine question is just an illustration of a bigger and more relevant issue, the issue of human liberation, which makes this play particularly important in the history of theatre.

In the production of the Hungarian Theatre in Cluj, directed by the young Botond Nagy, the festival audience had an opportunity to see an extraordinarily inspiring, seductive, techno Nora. The entire performance takes place behind a transparent curtain, onto which various drawings, photographs, and animations are projected, bearing associative meanings. The entire staging is very psychedelic, the plot balances between rational and irrational, between losing and regaining one’s reason, which reflects Nora’s deep emotional distress. It begins with a mesmerizing atmosphere, Nora (played by Kinga Ötvös) is alone on stage, her costume stylized, illuminated by red lights, waiting for an online shopping delivery. As the stage gets covered in boxes, her multifaceted drama begins, revealing close links between marital and material interests, as well as the problem of Nora’s deep emotional unfulfillment, which plunged her into the depths of disorder.

Nagy’s “Nora” is truly extraordinary, because it has brought a myriad of fascinating visual solutions that are deeply rooted in Ibsen’s play. For instance, the scene which best reveals her vulnerability and essential loneliness in her marriage is the one in which she is exchanging text messages with Torvald (played by Péter Árus). Their messages are projected onto the second level of the backdrop, a transparent glass box into which Nora is cramped both literally and symbolically. Accompanied by minimalistic, melancholic, electronic music, without a single word spoken, in a tense, stifling atmosphere, we read letters which reveal Nora’s fear of life, which powerfully illustrates the horribly gaping distance between them. We should also single out the truly magnificent ending which aroused a rare aesthetic feeling linking the power of drama and a striking visually-musical performance. The scene opens with Nora lying down, almost naked, in an empty aquarium set in the middle of the stage, like a fish out of water, without the ability to survive. The scene is accompanied by a painfully melancholic Robert Burns’ song “My Heart Is in the Highlands”, performed by Arvo Pärt. Once we reach the famous scene in which Nora expresses her need to become human and to get rid of the marital chains, she decisively stands up, abandons the curled-up position, the corner she was pushed into and speaks up. She is still in the aquarium, but now in a stable, standing position, which underlines her resolve. The scene ends with her mesmerizing singing of “I Don’t Love You Anymore”. After that, Nora steps out of the aquarium, or out of the glass bell, she tears down the final, paper wall, and passes through it without looking back, symbolically demonstrating that every wall can be torn down.

translated from Serbian by Vesna Radovanović

Ana Tasić is a theatre critic, researcher, lecturer and journalist. She lives and works in Belgrade, Serbia.