Europe: A library or a supermarket?

A library or a supermarket? If one wished to come up with a successful metaphor for Europe at this turning point of its history, which would be the most accurate one?

When people from different countries sit around a table in order to exchange opinions regarding “Democracy in a Migration Society” – this being the topic of the meeting organized by the Union des Théâtres de l’Europe on Sunday, January 15th, at the Volkstheater in Vienna – several questions are raised and this is one of them.

This issue is barely discussed, although it is extremely topical and will continue to be. But it also happens to be “quite provocative”, as initially described by Ioanna Petritsi, a representative of the ARSIS non-governmental organization and the National Theatre of Northern Greece.

“For the time being, to talk about democracy is a distant dream in the immigrant society”, she added. The image of tents buried in snow on the Greek islands was so recent that the discussion could only start with the country that has been asked to cope with a big part of the problem.

“Under the so-called ‘emergency situation’, all aspects of democracy, including representation, are sacrificed. The immigrants are treated as powerless individuals who have no control of their own lives and make no plans whatsoever. Indicative of this situation is the fact that those asking for political asylum have limited access to their legal documents, if they have any access at all. The country they are taken to is decided about without their knowledge and they usually are the very last to find out where they are going.”

But Ioanna also informs us that even in everyday life in the camps, where she has worked, “every single attempt of self-organization comes to nothing. Usually it is the most powerful one who dominates.”

Meera Jamal has lived and worked in Germany since 2008. She had to abandon her country, Pakistan, where she had been working as a journalist. Being sensitized on human rights as well as openly being an atheist, she would often be threatened back home. But initially she was similarly treated by her fellow countrymen who had also fled to Europe. They would ask her how she could say she was an atheist, and if she wasn’t aware of the consequences for those who leave Islam.
As she pointed out, however, fear lies on both sides, and she goes on to share a story she has included in one of her articles. Her neighbour in Wiesbaden was horrified when she hung a black piece of cloth in her garden in order to keep the insects away. They warned her to remove “this black Islamic flag”.

She went on to say that both sides have rights that ought to be equal for everyone, and that immigrants are often unaware of the laws concerning women and children’s rights. This is where the theatre could offer some help, being an accessible source of information and education.

Monika Mokre, a political scientist, pointed out that fundamental human rights such as housing, food or access to education and work, immigrant or not, ought to be safeguarded. She explained how there are people who have already been living in Austria for ten years and still can’t vote. Asylum seekers have no rights at all and they can’t even call the police. This is a challenge and the effort needs to last long. She says that this issue is much wider as it has to do with the kind of society we want to have.

A different perspective was presented by the Ukrainian artist Vlad Troitskyi, the artistic director of the independent Dakh theatre, who thinks countries who receive refugees such as Austria and Germany are eventually “at the mercy of the ones that they invite”.

“The immigrants often feel everyone owes them. Help, money, whatever. They adopt a childish behaviour and you cannot carry out a conversation with them. However, Europe itself has had a childish attitude. In the end no one makes any decision and no one takes responsibility. It is always someone else who ought to decide. As a result, populists make a comeback and opinions such as ‘all immigrants are evil’ and ‘we should close the borders’ become more and more popular. In my opinion, Europe is like a library suddenly invaded by a group of people; they are all refugees and the rest of us hesitate to say, ‘hey, this is a library’. Everyone can come in but only in order to read books. They can’t do anything they want. This ought to be emphasized. Certain things can or cannot be done inside a library. In this way, voices which no one takes seriously at first, like Hitler’s, Le Pen’s, Trump’s or Putin’s, become stronger and stronger, as they seem to suggest some solutions to the arising problems; and then the transformation takes place”, he concluded.

The director and activist Tina Leisch described the metaphor of the library as a “post-colonial ghost”, suggesting in return that of the supermarket. In her opinion, the former metaphor suggests that the library is just part of the culture immigrants come to vandalise. For her it makes more sense to compare Europe to a supermarket where there is enough food for everyone. Everyone can eat as much as they want. However, the people who have produced something suddenly want to keep it for themselves and say ‘we caught that fish; this fish is from our country’. It’s not true that anyone wants to burn down libraries. But everyone has the right to consume fair trade products, which is why democracy should not be considered exclusively in terms of borders or the economy, but in terms of human rights as well, according to Tina Leisch.

“I really believe Europe is a library. It hasn’t been merchandised; and the question is whether we want to sacrifice a civilization which has been alive for three thousand years”, replied Vlad Troitskyi. Monika Mokre objected and said that integration often goes both ways. So societies change; they also change due to immigration. She stresses that we need communication, and that there shouldn’t be any ghettos. Instead we should think about integration opportunities, and that we should allow new ideas to be placed among existing ones.

And where does art and theatre fit into this situation? According to Vlad Troitzkyi, the role art and the theatre play is huge, since “neither politicians nor the church have any effect any more. The artists’ role is to pose these annoying questions first to themselves and then to the public”, he said.

Tina Leisch also believes in the power of theatre, however she has started doubting its actual effect, since it is mainly meant for intellectuals and artists who are already aware of the issue. In Vienna, which is a city that has an immigration background, 40-50% of the people don’t go to the theatre. How can we attract these people? The theatre ought to invite them and step out of the stage. But it also ought to incorporate opposite opinions, after having held a discussion.

Meera Jamal suggested that the best asset is to have the newly arrived immigrants trained in the existing rights of the country that provides shelter. Ioanna Petritsi showed us a new aspect too: theatre games thanks to which the children of the camp were able to express themselves, and which also enabled the detection of child abuse, so that steps were taken against it.

Eventually everyone agreed that there are no easy answers, just many questions that should be posed and discussed openly, as will be done in another panel in autumn at the University of Vienna, in a collaboration between the Schweigende Mehrheit and the Union des Théâtres de l’Europe. 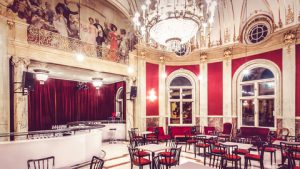