article by Emiliia Dementsova from Moscow

Electrotheatre of one author or «However wonderful staying in the USSR might be, I prefer to live in Europe.» 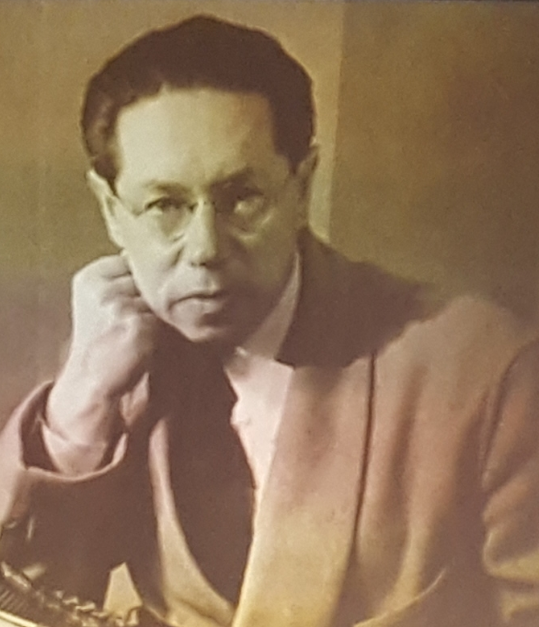 On the 18th of February at the Stanislavsky Electrotheatre a presentation of a book by Anne Hartmann titled I Came, Saw, I Will Write. Lion Feuchtwanger in Moscow in 1937 (Wallstein Verlag, 2017) took place. The event was held in commemoration of the recent 60th anniversary of the death of the famous writer. It was made possible thanks to the support of the Goethe Institut, the Embassy of the State of Israel in Moscow and the Feuchtwanger Memorial Library of the University of Southern California. And it unexpectedly resulted in exposing all the soreness of the contemporary Russian society permeated with intolerance and hostility, as well as its disposition to not so much appreciate the legacy of Feuchtwanger the writer, as to appraise his estate, fees and royalties.

The event was facilitated by consecutive interpretation of the German speakers’ addresses into Russian. The arrangement proved fortunate since it allowed some remarks from the public  escape translation — and therefore ever being heard by the guests of the event. As for the latter Herwig Lewy, theatre critic by whom the event was conceived and chaired, and Ian Wallace, the Chair of the International Feuchtwanger Society, delivered short and sketchy pieces fleshing out Feuchtwanger’s biography. It was quite illuminating to learn about  the writer’s high productivity (a novel in two years), as well as about the fact that all his early works were written with a pencil, or dictated. Those present also heard about the death of Feuchtwanger’s baby — event that emerged in many of his novels. Details of Feuchtwanger’s short creative collaboration with Bertold Brecht were covered by Avraham Oz, theorist of literature and playwright, who enlarged on  Brecht’s frustration over Feuchtwanger’s infatuation with historic background and his being true to fact instead of focusing on Brecht’s epic theatre (“dialectical theatre”), defamiliarization, and class approach. Brecht, Feuchtwanger and Willi Bredel also worked together as the editorial staff of the monthly periodical Das Wort (Word) (issue 1 July 1936 – issue 3 March 1939), the very existence of which periodical a member of the public loudly questioned, accusing the speaker of distorting facts.

Anne Hartmann’s book, that aimed at placing Feuchtwanger’s text back into its historical context, became, as Herwig Lewy put it, a sort of «archeology of knowledge», marked by profound literary analyses and most careful treatment of the sources. It is particularly obvious in the case of the reports by Dora Karavkina, the interpretor who was appointed to take care of the writer’s needs, which she wrote on regular basis. Those reports were passed over to Nikolay Yezhov, the Comissioner-General of the State Security at the time, and from him directly to Josef Stalin. For example, here is a fragment from the report dated 27.12.1936: «Today was a difficult day, as Feuchtwanger at once gave vent to his indignation over the Pravda demanding that he make some changes in his article about Gide (André Gide, a French author).  Now, says he, here is substantiation to Gide’s claim that we have no freedom of opinion, that  one can’t express one’s thoughts, etc.» Or this fragment of a special memorandum made by the 4th Department of the Head Directorate for State Security that reads: «Generally the impression I get {…} is that you have neither the freedom of speech, nor the freedom of press.»

«You cannot clean the mess in history with a pencil eraser», said, and wrote, Feuchnwanger, yet he himself fell victim to self-censorship. A photo of a page from his manuscript was demonstrated, that showed many introduced amendments, corrections and scratched out words, all done upon having been insistently advised to. A point was made — all admiring remarks addressed to Trotsky that the first version of the book featured, the author, in the aftermath of, among other things, a visit paid to him by Mikhail Koltsov, re-addressed to Stalin. Nevertheless, the final version of the book that was published in the USSR, still had 124 references to Trotsky, which made the book most embarrassing. The phrase characterizing Stalin: «It is obvious that Stalin, prey to the feeling of his own inferiority, lust for power, and boundless vindictiveness, desires to take revenge upon all who has insulted him, and eliminate those who may turn out dangerous in any way» also remained.

The first run of 250 copies of the book that bore mark «NKVD» (People’s Commissariat of Internal Affairs) later boosted to a 200 000 run rigged with an introduction of «the publisher» – of, in fact, the unofficial editor of the book, Stalin — in which it was said that «The book contains a number of mistakes and faulty judgments. All these mistakes will be easy for the  Soviet reader to make out. Still the book is of certain interest and some significance as an attempt to study the Soviet Union in a fair and conscientious manner.»  The whole run was sold out in a week. Feuchtwanger’s travel notes, or, as he chose to call the book himself, «report on my voyage for my friends», was approved for print and distribution, yet it never earned official acclaim.   There were rumors that the book was to be banned, yet there was never uttered anything like an official ban. A fragment from memoirs of a woman who was contemporary to the events was read: the woman recalled how she, then a student, introduced into her school essay a quotation from Feuchtwanger,  to be later summoned to the headmaster of the school and strongly advised to rewrite the essay, leaving the quotation of the unreliable writer out.

Moscau 1937 as well as the thorny path that lead to the publication of the book, prove that Feuchtwanger was neither blind, nor naive. His gift of a historian and penchant for accuracy, that Bertold Brecht was so quick to discern, undoubtedly helped him see through the staged tableaux and arranged events so far from the true Soviet life, that were offered to him «from above» in order to «cultivate the right views». He was aware and he understood, even if he was protected from communications with unwelcome parties, like Pasternak or Pilnyak, for example, who were believed to have «influenced negatively» Andre Gide. But he was also aware of the other thing which was  infinitely more terrible not only for the USSR, but for the whole world — of fascism in its numerous manifestations. Tactically that which Feuchtwanger did was perhaps a deal with his own conscience, and yet nobody has a right to cast stones at him for that. Moscau 1937 never became a book to straddle the fence and please all on whatever side of it, on the contrary, it turned out to displease everybody irrespective of their fence-relative position  — and this makes the paradoxical honesty of the book. Strategically Feuchtwanger intended his book to become a means of uniting the émigré circles, and an attempt to support the image of the Soviet Union in the eyes of the world by presenting it as the main stronghold in the confrontation with Hitler. Whether ends justify means is an eternal question, and there is no satisfactory answer to it.

What path to choose — Feuchtwanger’s, or Andre Gide’s who described the USSR  with bitter honesty, or to follow Brecht who visited the USSR but never wrote anything about it — everyone chooses for himself. One thing is obvious — if Feuchtwanger’s book did do any harm at all, it harmed only himself, yet it never shadowed or distorted his image of a brilliant novelist, a master of historical novel and psychological portrait, whose books made a considerable contribution to the golden fund of the world literary legacy.

Unfortunately the public that came to the presentation of the book I came, saw, I will write. Lion Feuchtwanger in Moscow in 1937 learned little about Feuchtwanger the man of letters. Presumably the organizers of the event, just like Feuchtwanger before them, naively overestimated our public, assuming that their audience would be prepared for serious conversation and was well acquainted with the works of the writer.  Actually it turned out that the part of the audience which was drawn to the event by incentives other than professional interest — let’s call them incidental, casual visitors — formed  their own  opinion of Feuchtwanger as of basically a traitor.  For the woman sitting next to me the highlight of the event was the slide featuring Feuchtwanger’s mansion in the USA, and detailed, almost fit for an advertising booklet, description of the beautiful place in California where that house is located. «Living in style indeed! Now why all cads turn out living so well?» said she loudly, addressing other members of the audience.

Even when leaving the Stanislavsky Electrotheatre one could still hear derisive remarks and nasty sniggering that accompanied discussions of the «Jewish core» of the writer, which was innocently but inconsiderately emphasized by Ian Wallace, who remarked that Lion, who was never even mildly interested in his father’s margarine factories, must have nevertheless inherited from his family the knack of haggling well, which helped him to secure very favorable terms for himself when dealing with publishing houses. This ordinary half-joking remark became a litmus paper, which sadly showed that our society is far from having purged itself of household antisemitism.  «A Jew, and what a Jewish Jew!» came from the audience, when a fragment from Feuchtwanger’s letter was read, where he with perfect sincerity expressed the pleasure he took in the long runs of his books in the USSR,  in being  generously welcomed, in the gifts meant to win his favor. For the Russian public the photograph of the mansion completely eclipsed a rather rare photo of Feuchtwanger standing behind the barbed wire fencing at Les Milles, in the concentration camp where he was interned when France was occupied. Much was said about  the long runs and his passionate infatuation with those runs, about the fur-coat and caviar, receptions and banquets, ovations and lucrative proposals, about «massaging ego», maybe even slightly too much, yet deprivations and defranchisement, his experiences in the camp, horrible time on the move, insults the fascists subjected him to were  hardly mentioned. It must have been assumed that people that are likely to come to such a presentation have all read The Devil in France. My Encounter with Him in the Summer of 1940, but it was one mighty wrong assumption. The public was impressed not by the fact that Feuchtwanger’s library (10 000 volumes and his own manuscripts) was burned, nor by burning and banning his published books, declared degenerate in Germany, but by the size of his royalties, and also by the phrase said by the German visitor: «However wonderful staying in the USSR might be, I prefer to live in Europe.» Well, just like The Magic Mountain running at the Electrotheatre showed the viscera of the public, the today’s event, this «coming face to face with the reader», also proved an interesting social experiment.

In one of Karavkina’s reports a certain incident is mentioned: when Lion Feuchtwanger agreed to introduce the corrections suggested by Maria Osten (a German writer and Mikhail Koltsov’s life-long partner) into his manuscript, «with the exception of the phrase about «tolerance», which he absolutely refused to scratch out». Well, if it was «Moscau 2019» Feuchtwanger was writing, the word «tolerance» wouldn’t be in the manuscript to begin with.