The present section of the website aims at drawing an overview of the contemporary performing arts system in Italy. A short note is necessary to introduce the reader to the functioning of the section – which tries to exploit the web potentiality at its best – but, most of all, to explain how and why a hyper-textual structure is more than ever cut out for the Italian present environment. Even though the nature of this issue (to which an agile and highly readable language is requested) cannot confide in creating a thorough and executive summary of the whole spectrum, the author’s point of view is that a dynamic and compound collection of small focuses has the chance to mirror the Italian system more faithfully than a single long essay. Such belief stems from an eight-year journalistic/critical experience that revealed the Italian stage arts landscape as a very fragmented organism in which the territorial diversity, mostly characterized by sensible economical differences, creates a plurality of production/circulation opportunities that goes hand in hand with the local environment.

As can be seen in the map of the section, one focus is sometimes generated by another and the focus itself originates a further one in a complex net of relations and interdependence, a lively system that is currently facing an evident shift and, yes, shows a fundamental ability to preserve its creative attitude. Cultural Policy and Theatre Practice, for example, are tightly connected; one necessarily determines the other, and the latter gives birth to peculiar Aesthetics, with related trends and a specific appeal on the audience, which in fact can influence (or at least interacts with) the Cultural Policy.

A final point must be brought up. The situation described in the present section was written in February and March 2015. In those months the whole state support system was undergoing a deep change (a short account is offered in the Theatres Structure paragraph) which still needs to be tested and processed by the system actors. In other words, at the present time the global organization of public money for the Italian performing arts scene is reshaping in a new order which is going to affect the balance between the public and private structure in the most unpredictable way.

This is why we chose to add an “S” at the end of the word “Theatre”.

Thumbnail image of this article by courtesy of CollecitvO CineticO. © Valentina Bianchi 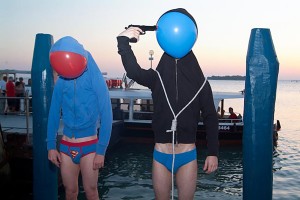